Robinson chose this translation of the Odyssey a few years ago and contacted him joining LinkedIn.

“Basically, I called him,” said Robinson. “I knew his name and I saw his name pop in for reviews.  The class had questions that I couldn’t really answer and maybe he could answer them.  I thought they were good questions and I thought it would be fun to hear.”

Students were encouraged to ask any questions they had. Those who did speak up needed to shout and enunciate at the computer screen.

“I thought it was cool that we took the time to get his opinions on the questions we had,” said Sophomore Marah Walker. “Someone who had studied something that much, knows a few things.”

The class also watched O Brother Where Art Thou and read the Penelopiad by Margaret Atwood and asked Lombardo about the two.  He had an apparent dislike of the two because of his passion for the original Odyssey.

“You can tell in the way he quoted the odyssey that he truly loves the story,” said Sophomore Jessie McMullen.  “If I had been able to listen to him recite the book to me, I think I would have enjoyed it more.” 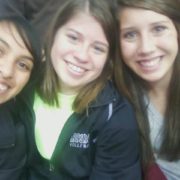 Always laugh when you can. It is cheap medicine. -Lord Byron Have you laughed today?

Students tour Target Field, the most eco-friendly stadium in America (with Infographic)