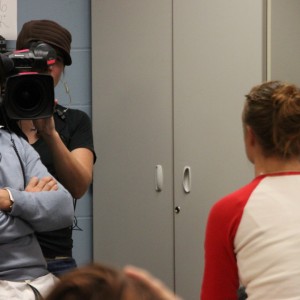 For the past couple of months, Asylum Entertainment has been filming four Buffalo High School girls almost everywhere they go for a reality TV series that will be airing on Lifetime Network on March 15 at 10 p.m.

Buffalo High School Seniors Calli, Kendra, Megan and Sarah Durst are identical quadruplets, one of only 63 sets of quadruplets in the world. They are the subject of the show Four of a Kind.

The odds of identical quadruplets are one in 11 million to 15 million, and there were no fertility drugs involved with the Durst girls. The girls have captivated the media’s attention since they were young, having appeared on shows like “The Tonight Show with Jay Leno” and “The Today Show.”

“I’m excited to watch the show and see the final product of what the camera crew captured,” said English Teacher Ryan McCallum.

The show will air every Tuesday at 10 p.m on Lifetime Network, and repeated every Wednesday at 8 p.m.

"Need a quiet place to study? Need some time to study? Visit the 'Resource Room' that is open to all students.