It was a hard game for the boy’s hockey team playing Edina on yesterday at the civic center.  The Bison suffered a hard loss with a final score of 2-8.

Although Edina is ranked 6th in the state 2A, Buffalo came out on fire with Senior Tony Thien scoring the first goal only six minutes into the first period. By the end of the first, Edina was able to sneak in three, goals making the score 1-3 Edina.

The boys kept fighing hard as Senior Nick Jones scored with the assistance of Junior Sam Klein 7 minutes into the second period. 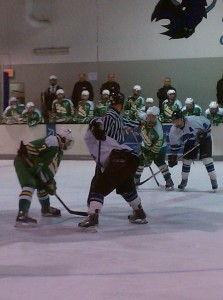 Still it was not enough to beat Edina as they scored 4 more goals on Buffalo’s goalie Junior Blake Schmidt in the second period and 1 more in the third period.

This was the Bison’s last home game before their first round of sections in Moorhead on Tuesday.