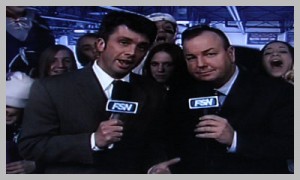 FSN Canceled all Prep hockey games being broadcasted on Fsn for the rest of the year, except for hockey day in Minnesota and swans cup.

In a interview with Duluth news tribune.com, Mike Dimond said.

“It’s totally financially related from a business standpoint,” said Dimond, FsSN’s senior vice president and general manger, said today. “[Ad revenue] wasn’t coming in to the degree that we needed it to. The simplest way to put it is that we’re not a non-profit business, and ultimately I have a responsibility to the bottom line of the company. This time, it just wasn’t making it. The revenues didn’t offset the costs.” After having a FSN night game for the past three years. Against Duluth East, Cloquet, and last years against Wayzata.

“It sucks”, said Junior Cody Elletson.”Been looking forward to this for a long time. Especially Since it’s against our conference foes.”

“Even if we don’t have FSN there we are still gonna go out and play our game” said Junor Nick Jones.

“We are very disappointed”, said Sophomore Prentice Basten.” We were looking forward to having FSN there, so people can see our team play that wouldn’t normally.”