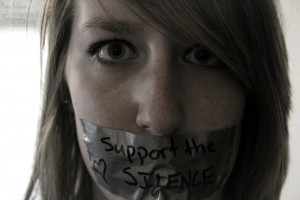 On Friday April 15, seven BHS students participated in a “Day of Silence”, a day devoted to silence in order to bring forth attention to lesbian, gay, bisexual, and transgender (LGBT) bullying and harassment in schools.The selective participating students spent the entire day verbally quiet to support the cause and stick up for those who are unable to do it themselves.

“To me, this day had a lot of meaning,” said Junior Maya Bolduan. “I know a lot of people involved in the LGBT community. Lots of people aren’t accepting of them and it’s not fair to those harassed. I think it is worth standing up for.”

Throughout the day, participators chose to promote the cause in ways other than silence such as posters or cards. Bolduan told others about the cause in a different way.

“I wrote ‘GLBT Support the Silence/Raise Awareness’ on my hands so people knew what I was doing,” said Bolduan. “I went through the lunch line and punched in my pin number and the lunch lady looked at me waiting for me to say my name so I had to point to my hands so she knew. It was so hard to stay quiet al day though. I’m a very talkative person and there were so many jokes I wanted to make throughout the day.”

Multiple questions arose from classmates who were unaware of the day. Informing them about the cause was the purpose of the entire thing.

“I didn’t know about it until I was in a class with someone participating in it,” said Senior Sadie Holland. “I asked what it was about and it was interesting to learn about the cause.”