Global Warming is a widely talked about topic in the world today, and on Friday March 25, Jose Velez, project supervisor at the Blue Green Alliance Foundation, came in to talk about “green jobs.” He has worker there for 1 months now and has become a big part of the Foundation.

“Between 40-45% of all windmill parts are made in [the United States],” said Velez. “The rest are imported from other countries, such as Canada.” 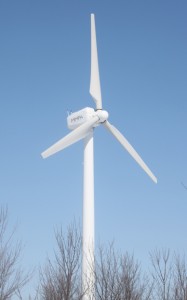 Many people know that the city of Buffalo had a Electricity generating windmill built by the high school which creates a lot of energy for the school and more.

Velez greatly emphasized the fact that we are losing jobs at a very fast rate in America such as your everyday “blue-collar jobs.”  On the other hand, he talked about how America is creating many green jobs domestically, mostly because of the fact that you can’t export electricity to other countries.

Green jobs are actually very high paying jobs which are giving many people who have lost their jobs he opportunity to work again. They involve things such as solar panels, Wind powered turbines, and other eco friendly

The Blue Green Alliance Foundation is a non-profit organization dedicated to education and research about job creating solutions to global warming and other environmental challenges.