The Music Department put on one of its last concerts last Friday. Several Band, Choir, and Orchestra groups performed a variety of songs, some from earlier in the year that they wanted to do again, and others that they had wanted to do for some time. These groups include: Concert Orchestra, Chamber Strings, Concert Choir, BHS Singers, Concert Band, and Jazz 1. In addition to the multiple songs performed by these groups, seniors that are in these groups were recognized as they prepare for graduation. 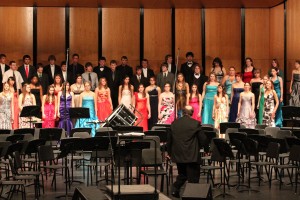 Chamber Strings, made up of eight orchestra students, then entered the stage with songs such as “Andante Cantabile” by P. I. Tchaikovsky and “Eleanor Rigby” by Lennon/McCartney. The 19 students in Jazz Ensemble 1 then took the stage with conductor Scott Rabehl with a couple of songs including “Sweet Home Chicago” by Robert Johnson (Soloists: Brooke Gagnon, J.D. Laskey, Max Lundeen, Bergen Nelson, and Ian Robinson). Walsh took the stage once again with the BHS Singers who performed songs such as “You Are the New Day” by John David and “Words” by Anders Edenroth.

Before the seniors were recognized and the awards were given out, Concert Band performed several songs including “The Incredibles” music by Giacchino/Bocook (Soloists: Kassi Williams and Julie Watermiller). Also, one of the other songs performed was “With Each Sunset” by Richard Saucedo (Soloists: Margaret Polzine and Amanda Jendro) and was conducted by Student-Teacher Stephen Boal. Friday was Boal’s last day with the Band students.

Concert Band’s final number was “Blue Shades” by Frank Ticheli (Soloists: Anna Jacobs, Brittany Downs, Cami Davidson, Amanda Jendro, Margaret Polzine, Anna Huff, and Luke Hansen). Rabehl mentioned before the song that this was a piece that he had chosen about two years ago for this group to perform at this Showcase Concert. The song also received a standing ovation from the audience. 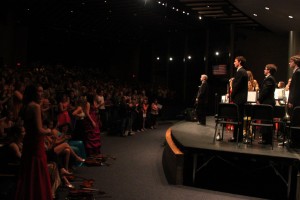 Following “Blue Shades,” Knutson, Rabehl, Walsh, and Accompanist Jill Starr came on stage to honor all 67 seniors that participate in one of these groups. Each student received a plaque for their dedication to music. There was one more person to be recognized for his dedication to the Music Department, BHS Auditorium Technician Richard Liefert. Liefert has worked as the Auditorium Technician for 14 and a half years and will retire this June. He was also given a special plaque recognizing all his work for the department.

Then there were special awards given out to those that participated in All State Choir or All State Band. As well as certain members in Tri-M that have demonstrated Outstanding Leadership, Service and Master Musicianship. Other awards presented Friday include:

Before all of the Band, Choir, and Orchestra students came together for the Combined Finale, some of the students came to the stage to present a few gifts to Knutson, Rabehl, Boal, Walsh, and Starr. After all awards and all presents had been given out, all of the students joined up to perform “Battle Hymn of the Republic” by Howe/Steffe. Emily Bengtson, Maya Bolduan, Julie Watermiller, Sami Manick, Brooke Gagnon, and J.D. Laskey had a solo during the final piece of the night.

The Arts Finale Concert, the final choir concert of the year, will be held next week on June 2nd at 7:30 in the PAC. Before the concert, at 6:30, there will be an Art Show at which several Art students will display their work.

Boys lacrosse has a tough week