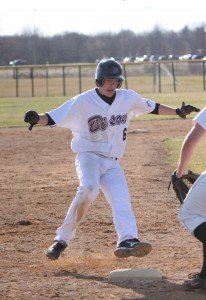 “It is an unbelievable feeling,” said Senior Cody Elletson who had 3 RBIs in the game.

Buffalo was down 7-0 in the 2nd inning, but managed to pull through to tie the game 7-7 at the end of the 7th, resulting in extra innings. Both teams were neck-to-neck and in the 10th inning Buffalo took the lead to win the game. Sophomore Brennan Gilyard hit a home run bringing in 3 runners.

“It was the best teamwork game yet so far,” said Senior Brian Holthaus, “Everyone contributed their part to win the game.”

Buffalo knew they were conference champs when they found out St. Michael had lost their game last night’s. The Bison and the Knights were tied for the title, but with STMA losing their game, Buffalo is two games ahead of  the rest of the M8 teams.

“When we found out the Knights had lost we couldn’t help but smile,” said Elletson, “The fans at our game were unbelievable and very supportive.”