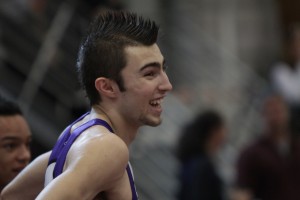 Senior Jerome Begin put an end to his college search on May 3rd.

“I chose NDSU for track because I really like the location and it has both my interests in a good track program and careers i’m looking to study, such as engineering and chemistry. It helped that it was the largest amount of scholarship money and closest to home.”

Over 50 colleges sent him letters, 42 of them were D1 schools which  included Ivy league schools: Harvard and Princeton.  8 or 9 colleges also wanted him to come see the campus’.

“I did two official visits with Madison,WI and NDSU, I was gonna go see North Carolina but backed out because I wasn’t interested enough to travel that far.”

NDSU is a very talented track team and a division one school.

“I am one of the top recruits to NDSU. I will be running the 400 meter hurdles, open 200 meter dash and the 110 meter high hurdles. Last year in track and field I finished in the state meet 2nd in the 100 meter hurdles and 5th in the 300 meter hurdles.”

Jerome also ran a personal record of 38.07 in the 300 meter hurdles at MSHSL Section 2AA Finals, placing first on the same day. Information from: http://mn.milesplit.com/athletes/955136

To go along with all the offers for track, Jerome also received offers for football. He then had to make the big decision of which sport he wanted to go with. “I chose track because I feel like I have a lot more potential for it and just based on stats and times I have done way better in it then with football.”

Some Juniors Given Opportunity to Be Teacher's Assistants