The 33 members of Buffalo’s winter Drumline practiced eight hours a day, four days straight over winter break to get ready for their season.

The Herd Drumline is instructed by TJ Larum and includes 30 high school students and 3 eighth graders. The camp was held at the BAC at Buffalo High School over winter break. The team got just a one hour break for eating each day. 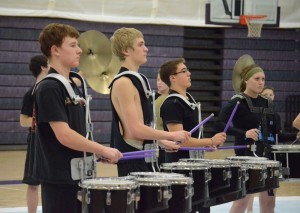 “I’m glad I joined Drumline,” said Sophomore Laura Morris. “I like the people and the instructors, it’s super fun. But it’s also my first year so I don’t know everything, but it’s cool because I’m learning a lot.”

Each year every Drumline receives a theme for their performance, and this year the theme is “What goes UP!” Their uniforms are white with arrows facing up.

“Our Drumline is very dedicated, and he people in it are awesome, I can’t wait for our shows,” said Freshman Nick Soden. “Winter camp was really fun also.”