Saturday, January 25 was a huge night for the BHS music department. The BHS Singers, Treble Singers, Jazz I, and Chamber Strings I all shared the stage for the Night Out For Music, the music department’s biggest fundraiser of the year. This year’s theme was ‘A String of Pearls,’ and it went much better than expected.

This year, the 35th annual jazz concert made over $9000, a new record for Night Out profit for a year in which the concert groups are not going on a trip. “It’s great,” said band director Scott Rabehl. “[It’s] awesome to know we have extra money going forwards this year.”

Many people come to Night Out not for the music or to support the music department, but for intermission. During intermission, desserts are served, all donated by families. There is also a silent auction, which is a big part of the event’s profits. All auction items are also donated by local businesses or people.

The music performed is also great quality, being performed by some of the top performing groups in our school. About 20 songs were performed, many co-performed between multiple groups. Overall, ‘A String of Pearls’ was a great night, and a great opportunity for the music department. 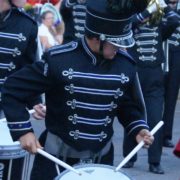 If you're reading this, I probably wrote the words above. I wrote these words too. Good for me, I guess.

Tips and Tricks for Asking Someone to Prom

The Track and Field Team is Giving Back