“I thought we were timid and came out slow. I think a shorter bus ride could’ve helped us but that’s no excuse, we had at least an hour to get our legs ready and under us for the game”, said Senior Goaltender Ben Zitur.

The Bison got off went down 2-0 after the first period with power play goal from Spuds Cole O’Connell with 12:29 left to go in the first period. They then followed that with the unassisted goal from freshman Spud Nolan Westra.

The Spuds followed that with one goal in the second from Jack Fahrendorf coming with 6 minutes
left in the second, then two more goals in the 3rd period from sophomore Carter Randklev ending the Bison’s season with a 11-12-3 record.

The Moorhead Spuds will host #6 Rogers Royals on their home ice in the section 8AA semifinals February 20th at 7 P.M. 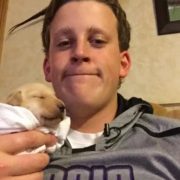 They call me Big Dave.

ACT changes for the better?