Devan Dubnyk has done nothing but amaze since his arrival in the state of hockey with 31 consecutive starts, 24 wins, only 6 losses, and 5 shutouts. Many say that Dubnyk is the reason for Minnesota’s remarkable turnaround. Dubnyk joined the Wild after their sixth straight loss and made an immediate impact. The Wild are currently in playoff contention, seeded as the first wild card team in the western conference.

“[Dubnyk’s] been a godsend here,” said Bob Mason, Minnesota’s goaltending coach. “He came in and stabilized everything.”

Dubnyk gives credit to Arizona Coyotes’ goaltending coach Sean Burke for his dramatic improvement. “Right from the get-go, he just put so much confidence in me,” said Dubnyk. “There’s no words, it’s not like he pumps your tires every day, it’s just the unspoken, you know he’s got your back, you know he believes in you and you know he’ll go to bat for you. It’s, lets you go out there and relax and play.”

As long as Dubnyk keeps up his amazing goaltending play and our defense plays up to par and our offense scores goals, we will stay in playoff contention, and hopefully create a deep playoff run. 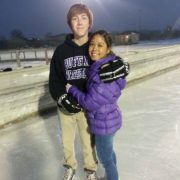 Do you know how to spell his last name?